This week in biology we did dissections. I dissected a sea urchin. The week before dissections we had to research our animals and learn about anatomical directions. My animal that I was assigned to dissect was a sea urchin. I was pretty excited because I was the only one in the entire class doing this animal. I then had to do research about sea urchins. I didn't know really anything about them before. Now I know a lot about their anatomy and what they eat and what they are classified as. I learned that they are in the Echinidae family, they fall under the Echinoderm phylum and are in the Eukaryote domain. Most of this has to do with where they live and their appearances. Sea urchins eat plant and animal matter, like kelp, algae, and dead fish. Their mouth/beak is on top while their anus is on the bottom. They have little tiny feet similar to starfish feet. Their ecosystem consists of algal biomass and rich kelp forests and sea urchin barrens. They are preyed on my by many predators such as, sharks, seals, seagulls, even humans. But they can sometimes protect themselves with their spines, better known as their spikes. These are not only sharp but very poisonous. During dissection week I also had to watch a friend dissect and take notes. My friend dissected a tiny lizard and these are the notes I took.

What is it?   The Domestication project was a project it help us better understand what Domestication is and what it has to do with. For this project my teacher, Summer, descided to let us each individually will choose a experimental question to study that has to do with the domestication. We could do it separatly or in groups. In this project we learned all about domestication as a whole, how animals inherit traits from their parents, and how to create our own self-guided research projects and have a better understanding of how to do things like conduct research. My group chose to study and see if dogs are offten misinterpreted for being aggressive when trying to be playful. Our hypothesis was, The dogs signal for play is different than aggression. Our results kind of supported our hypothesis but it also didn't. Although we observed that there is misinterpretation we realized that it's not only with agression and play but with other body languages as well. We found this out through conducting a bunch of different interviews that we filmed and made a video with. We had a wide range of test subjects. Our data that we collected is below. 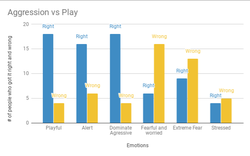 ​
Our reasoning behind this project was because in the beginning when Summer had us brainstorm ideas for the question we wanted to create and the projects we wanted to conduct, four of us had similar ideas. But one of us decided to work on their own, so us three, Rainey, Zoe and I, decided we would work together on this project. When we started brainstorming we all felt like a lot of times dogs behavior can be misinterpreted which can cause a lot of people to not want to adopt them. We thought this was kind of a sad thing and wanted to gain more knowledge and spread more knowledge to others. We interviewed around 20 different people. We showed them these descriptive pictures of dogs and their body language and the people would have to guess what they thought their emotion was based off of their body language. In learning about this project it made me wonder how much this actually does affect things like adoption rates. I also wonder how we can make people more educated about dogs and what their body language actually means.
Link to infographic