Your Life on Earth: Philosophizing Purpose and Place in the #21C

​Reflection
To close up my year in 11th grade humanities my teacher had us study Philosophy. We read "Into the Wild", a book asking many questions revolving life and death, purpose, happiness, and self reliance. We read many different poems, articles and watched a movie as well. We didn't discuss much of the religious side of things but we did touch on the idea of people committing suicide for reasons other then negative purposes. We talked about existentialist's ideas and thoughts.We talked about existentialism mainly in this unit.

Although I kind of enjoyed the topic we were learning I didn't seem to grow that much in my own personal philosophy as I was expecting. I also feel as though I didn't really get an understanding of my peers philosophical beliefs, even though I would have liked to. For me personally I felt that this unit touched a little bit too much on the idea of death and not so much the possibilities of the after affects of death and the wonderful things before you die. But yet some how from some of the presentations I saw, my peers seemed to chose to see the good in it all. I heard people saying that they believe the point in life was to enjoy the little moments and others thought the point of life was to do what ever brings one joy. So I guess if you have read this far you are probably wondering what my thoughts and beliefs are.

At the end of this unit we had to create something to show people at all school exhibition. There had to be a written component and a visual component. I decided to create a look book. Something that summarized some of my main beliefs about life in the form of pictures and poems. You can view all of this in the links below. The book I created contains thoughts based off of love, religion, experiences, the beautiful world around us and connections we create with others. I believe in a lot of things and my thoughts and ideas are the equivalent of a bowl of spaghetti. I really like my plate of beliefs and a lot of others probably feel the same way about the jumbled up mess but others may not. I think that my biggest take away from this unit is that you don't have to have a set of beliefs and thoughts. They can be all over the place and that is okay. I also believe strongly that people should be allowed to believe in whatever they desire, even if it doesn't seem "logical" or "correct" to you. The beauty of this topic is that we will always be asking questions. Some like, "Who made me?", "Why am I here?", "What is the point?", or "What happens after I die?" But like I said this is part of the beauty of Philosophy. If we knew all the answers there would be hardly any curiosity or creativity in the world. It would be dull and probably very sad and there would be nothing to look forward to.

The Ethics and Chemistry of Food and Cooking 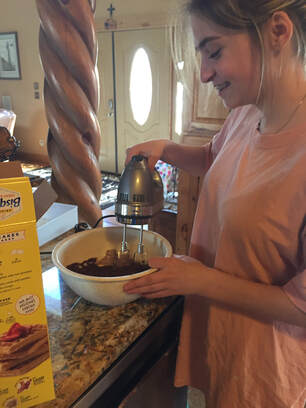 Project Description:
​This year for chemistry and humanities we dove further into the nature and origins of our food. In chemistry we learned about how each and every single variable and/or ingredients play big roles in the success of a recipe. We also learned the similarities in food science and cooking and the similarities in a recipe and a chemical formula. We were given the task to alter something in a recipe and compare the two variables to see how the altering of the recipe really affected the overall product. We then had to write a recipe card to help others follow the altered recipe we created, which can be found under my "11th Grade Chemistry" page.

As for the humanities side of learning we decided to look further into the ethics of food. We read "The Omnivore's Dilemma" to get a better understanding of different food industries. It talked about the organic side of farming, the local organic farming style, and the industrial food source. We also watched several movies and read articles to help us shape our overall ethical beliefs. To complete our learning we as a junior class went to several different areas around our town to help us get a better understanding of where some of our food comes from.


I was put into a group with several others for this field trip in which case we went to a local organic food garden. After we saw the fun and friendly organic side of things we drove to a butcher. But I wasn't quite sure what to expect and after a series of poor decisions and me not eating or drinking anything that day I ended up passing out on the ride home after seeing a cow get killed right in front of me. This project has definetly shaped the way I see certain things and has helped me to limit my meat intake and be a bit more cautious and aware of what I am consuming. Before this unit, I never cared too much about what I was eating. A lot of what I would eat was bad and I knew that but didn't care because it tasted so good. I still do this but not as much and I am more aware of it. This unit has truly shaped my ethical approach on things and I am happy I learned about everything I did and I wouldn't take back my experience if I could. The way my body reacted to such a thing helped change the way I see things for the rest of my life.